The Living Flame provides infinite possibilities for meditation, and the safest and most economical way of doing this is to use a candle. Sitting around a single flame can awaken in us the primordial instincts of the cave dweller, when it was fire that kept wild animals at bay, and was the only source of light and heat. It evokes feelings of comradeship, friendship and security
Some Yogis and Hindus still practise a fire ceremony (Agni Hotra), by meditating on the living flame at Sunset and Sunrise. This flam is produced by burning dried cow dung, as the cow is considered holy. It is said to purify the atmosphere and help the meditator achieve harmony with life. Here we use the lighted candle, which in churches throughout the world is used to represent living spirit. By meditating and participating in its light you will experience warmth and peace
Meditation
Meditate on the light of a candle flame. Then with Love kindle a small light in your heart.
With each peaceful breath encourage the light to grow,
until it permeates your whole being.
Then place the word LOVE in letters of gold, deep within the light.
Let go of the word LOVE and let it melt into the surrounding light
so that you are surrounded in an aura of golden white light.


Direct the light to friends in need and those you love 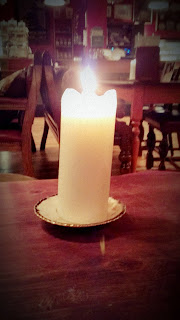 The Absolute washes away all considerations it is that which is without limit yet is complete in itself. The absolute transcends the rise and fall of the breath yet imparts meaning to the breath. Consciousness differentiates the space made by the breath; then in the still moment that it turns from up to down touches eternity. It is the still moments that absolve and wash away the stressful moments caught by the mind. The quieter and more subtle the breath the closer we are to the refining stillness that underlies the breath. The less breathing more prana as then we are more in touch with the manifesting life force of the universe. We should not force breath retention, as simply by refining and bringing light and consciousness to the breath, it becomes prana enriched, with the body making less demands on the breath. Breath retention then tends to be a natural pause with a merging with the healing and stillness of the absolute.

The Absolute is all value whatever; it is an all comprehending presence that lies both within and without. When meditating with the mind still, centre at the level of the Ajna chakra, the command centre of the yogi. This is the seat of transcendence and of the observer, it is important that there is no urgency whatever, simply a quiet watchfulness, as tension or stress will adversely affect the meditator.  The Ajna chakra lies approx one inch above the centre of the eyebrows and about one inch back and can be likened to the cave of the avatars, as in the still centre within resides the wisdom of the ages. It is during moments of stillness that we can make a calm appraisal of our lives, transcend and release ourselves from stress and merge with the healing presence within.
Posted by Unknown at Friday, July 22, 2016 No comments:

The Yogi will be traditionally of a calm disposition and have at his disposal techniques that will allow him to extricate himself from the entanglements of emotionally charged situations. Whenever the human psyche gets caught, that is identifies with an external situation it comes under the law governing those things and suffers accordingly. The yogi is aware that finite areas of disturbance are transient, and exists within an infinite field of other possibilities. Below the surface of the human psyche, not unlike below the surface waves of the ocean, there is a deep calm. At times it is useful to remind oneself that although surface storms come and go, there is a level in all of us where deep calm remains. A simple yoga technique is to practice entering short periods of calm and detachment with a short reminder “It Will Pass”.  It will also help to commit to memory, those moments of peace and stillness experienced during meditation and to recall them when needed. This will help to by-pass disturbing stressful moments and return to the calm within.
Posted by Unknown at Friday, July 15, 2016 No comments:

Healing Prana is the positive experience, felt, when there is affirmation of the formative energy that holds all life in being. Feeling and form are aspects of each other, as form arises from the need to fulfil a specific function. Square forms are not suitable for circular activity, and without even thinking about it, a form in the wrong place, does not feel right.
Pure Sentience, not occluded by mental doubt, is the most sensitive and subtle level of perception that we have. Prana being defined as the Infinite Manifesting Energy of the Universe (Vivekananda); and whether or not forms exist; the intelligence that manifests life is aware of its own nature, which includes every possible form, even prior to existence.
Without the manifestation of life, the life forms would be mere shadows, without any real sense of being. Wholeness of being occurs when the subtle template of forms (ideas), have become sufficiently energised, resonating uniquely and giving the appearance of separativity. Our spiritual ancestors described this as the crystallisation of consciousness.
We equate light with consciousness, as the more conscious we become of our internal content the more light we throw upon it. The light body is a body of form that has been made real by meditating on the subtle energy patterns that hold it in being.


These subtle realities can only be made real through practise and regular periods of meditation
Posted by Unknown at Friday, July 08, 2016 No comments:

Jacobs Ladder
Genesis Ch.28
Verse 11.  And he lighted on a certain place, and tarried there all night, because the sun was set; and he took of the stones of that place, and put them for his pillows, and lay down in that place to sleep.
Verse 12.   And he dreamed, and behold a ladder set upon the earth, and the top of it reached to heaven: and behold the angels of God ascending and descending on it.

Our Old Testament ancestors are often shown to be in direct communication with God, being guided in their day today lives as well as receiving prophetic images during sleep. In Jacob’s dream the angels ascending and descending are God’s messengers revealing the light of a higher consciousness. It is interesting that Jacob is able to receive God’s message, when laying down his head and letting go his sense contact with the earth. We can also from time to time gain our own intuitive insights during meditation or deep relaxation when stilling the mind and turning our attention away from the demands of the world.

The ladder envisaged by Jacob can be interpreted as a stairway to heaven and an ascending ladder of refined sense perception until there is direct communication with the Intelligence that has precipitated life. The human body is an energy system that has grown and evolved over millennia; breaking the bonds of previous inertias until at the highest level able to communicate with and divine the cosmic purpose of life itself. This ascending and evolving evolutionary ladder has been differentiated within the complex symbolism of kundalini yoga.

Each step of the ladder is represented by a chakra that is a circumscribed zone of physical, emotional, and psychic nerve plexus serving the needs of the body at each level. The lowest or base chakra (Muladhara) is the level of survival intent and the natural instinct to protect the life of the body. The next step up is to the swadisthana chakra the level of procreation and sexual enjoyment. The third chakra (Manipura) at the level of the belly or lower stove that provides the energy to power the body from food intake.

These three lower chakras are also shared with the animal kingdom and it is the transformation and focus of their activities to a higher and more spiritual level of activity that will transform their function. The fourth chakra the (Anahata) at the level of the heart is the centre for compassion, as from here the blood circulates around the whole body for the benefit of all. The fifth chakra the Vishuddhi is the centre we associate with articulate expression and may the truth on your tongue be the truth in your heart.

The centre between the eyebrows the Ajna chakra; like the Captain on the bridge of his ship, is from where we command things, and the top of your head the Sahasrara transcending all the limitations of the physical, includes everything there is. These infinite possibilities is symbolised by the thousand petalled lotuses. These lotus petals as crystallised love, ascend and descend on the wind of spirit, and are there to guide anyone ready to receive them.
We are all modifications of power, that is energy forms functioning in specific ways. The chakras, not unlike ascending steps on a spiral staircase, delight in specific functions. It is when we focus excessively on one function to the detriment of others that an imbalance occurs. This lack of wholeness can result in illness both physical and psychological.

Wholeness and holiness can be achieved by imagining that you hold a shield on your left arm and a sword in your right hand. The shield reminds you not to identify with whatever is thrown at you. To maintain a degree of detachment and only accept that which is in accord with your higher purpose; the sword is to remind you that your chief weapon is the word of spirit and if in doubt that silence is golden.

The shield and the sword are metaphorical figures and reminders that conscious is to be your guide and that the heart, the centre of compassion walks hand in hand with the highest intelligence that shapes all. Just as the Sun has been described as a step down transformer to protect us from intense all comprehending light of God, so do his angels ascend and descend, guiding each in accord with their ability to comprehend.