The Tree of Life

The Tree of Life as a meditation is part of a transformative process of developing a body of light that will provide security in all possible worlds. The Tree starts as an imaginative structure, but will quickly become an established and a reliable guide.

Every being has a Head, a Heart and a Will, which when harmoniously inter-functioning at their highest level, will provide an efficient reference for spirit. When meditating on your internal tree; repeat several times in words “Truth is my Real Nature”, then as a reminder, hang on your tree a Beautiful blue and white crystal.

Next, repeat the words, several times, “Love is my True Nature”, then as a reminder place on your tree a beautiful crystal with a hint of pink that signifies your compassion for all mankind

Next repeat, several times “Goodness is my Real Nature”; the Good is God working in you. Your crystal will have a hint of the Gold of sunlight, as Gold is a symbol of the Will; as it is a Gold that purifies all the rest. Consciously place your crystal on your inner Tree of Life.

This process can continue, by adding to your Tree your most important governing concepts. For example “Happiness is my True Nature”, or re-affirming Christ’s directive to “To Love one Another” until your inner tree is bathed in beautiful crystalline light.


The crystal forms that you place on your tree, transcends the limitations of the images, and at the highest level are the focus of fields of intelligence that will give life and support to those who believe in them. What may start as a meditation on the Tree of Life, will, if your heart be true, become a body of light that will support you in all possible worlds?
Posted by Unknown at Friday, December 18, 2015 No comments:

WHO AM I?
This searching question “Who Am I”, recommended by the Sage Ramana Maharshi, strips away the illusion of the egoic self, and when repeated as a mantra, is like the echo machine, familiar to sailors, which searches below the murky depths to reveal the reality that lays underneath.

“Who Am I”, is a direct question that gradually unmasks the false layers of identity, to reveal the true “Self”, the eternal reality that lies within. The non dual reality (advaita), that underlies all phenomena, can be likened to the ocean, without which the surface waves, which come and go, could not exist. It is identification with the surface waves of life that leads to confusion, emotional highs and lows, and the danger of being caught and transfixed by forces outside of ourselves.

Fortunately the road to freedom has been clearly outlined in the sacred texts and spiritual dialogues of the Upanishads, and in modern times in the literary works of Eugene Halliday. In particular his Reflexive Self Consciousness, which is an essential read for all those who seek psychological well being, and spiritual enlightenment. In the longest and oldest of the Upanishads the Brihad-aranyaka the Sage Yajna speaks and says that the Self (Atman), is not this- not this (Neti-neti), (Brhadaranyaka Upanishad, 5.5.15).

To repeat daily, in a spirit of self inquiry “Who Am I”, will bring to mind many attributes, such as one’s own social and economic standing in life, the impressions we have about ourselves, and a constant stream of sense related information. This like the surface waves on the ocean distracts from the underlying reality and hence the reminder, not this- not this (neti – neti).

The analogy of the waves and the ocean is far from perfect, yet it goes some way to representing the continuum of the life-force, as it expresses itself through all animate and apparently inanimate objects, each standing out for a time and creating the illusion of separativity. To experience the wisdom that underlies form we have to place the mind in the heart and experience the source from which everything has arisen, hence the reminder, not this-not this.

Thoughts, habits and desires, have an inherent will to exist, and the more we charge them with energy the stronger they become, until even unwelcome thoughts become difficult to dismiss, invading dreams and creating under currents of feeling that influence every level. Watchfulness and discrimination are two key words during our journey of self enquiry, and we have to be vigilant, so that that the mantra neti-neti, does not lead from one form of day dreaming to another.

We cannot see the world of spirit, but it is ever present, and can be sensed at intuitive levels of perception, such as when we see an object or scene of great beauty, and then realise that to recognise it, it must already exist within ourselves. We are reminded here, of the words of a Father to his Son in the Chandogya Upanishad (6.12-14). “Believe me, my son, an invisible and subtle essence is the Spirit of the whole universe. That is Reality. That is Atman. THOU ART THAT”.

The Atman is both immanent and infinite and it is that in us which knows and has the freedom to make choices. The choices we make, determine the nature of the life we lead and ultimately we cannot blame anyone for what happens to us, as individual choices determine our outcome. True happiness lies on the inside and not on the outside and it is by diving deep within, that we are able to tap a source of wisdom that provides the template for every living thing, and continues to guide each according to their individual karma and the lessons to be learned.

The key to achieving clarity and awareness is a short period of meditation every day, and by enquiring “Who Am I”, this thought will gradually put all thoughts and impressions into perspective and gradually consciousness will become the screen against which all other thoughts come and go.

It is taught that all mantric syllables become more powerful the quieter they become, hence they are first voiced, then whispered, and mentally repeated until only the essence of the sound remains. ‘Who’, may start its life as an interrogative pronoun, but during meditation becomes more subtle, and much like the air flowing through circled lips, when voicing “Who”, there grows the sense of reaching more subtle levels of inflowing energy and consciousness..

Gradually we begin to trust the intuitive response from centre and learn to ‘Let Go and Let God’, by responding to the truth within the heart, and that Self same intelligence, that has developed the flowers in the field, the ability of the turtle and salmon to navigate the oceans of the world. It will also guide man to develop to his full potential, if we would only stop, let go, and listen.

The all pervasive ubiquitous breath 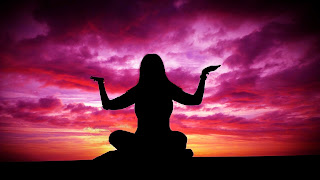 The all pervasive ubiquitous breath reaches from the highest to the lowest, from the basic physiological breaths that help improve the depth and action of the lungs, to the healing and spiritually transformative breath.

To help us to understand the spiritual and healing power of the breath, I include a few lines from a book by the Artist and Philosopher Eugene Halliday, ‘Contributions from a Potential Corps, volume IV, page 52’. To quote, THE ATMAN IS THE SENTIENT POWER operative within the single individual, which keeps the breathing process operative? It is the Power that causes the individual to breathe and so to sustain the life functions within the single organ. Atman = Brahman. Brahman is the Cosmic Breather who exists within the universe as a whole and maintains its vital processes.

As EH would remind us, we do not have a soul we are a soul; that is a solo zone of the Infinite Sentient Power of the Universe. It is the soul that clothes itself with the food we eat, until the time arrives when there is loss of interest, even with taking the next breath. The soul enlivens the body with each breath it takes, and there is an intrinsic link between the breath and the intelligent life of the universe.

This level of intuitive awareness is not a rare phenomenon because how many times have we entered a situation and felt uncomfortable or happy, based on feelings alone. Conscious breathing not only refines this ability, but also makes change possible as consciousness is the catalyst that initiates change.

To make a start, commence with the full breath and to avoid hyper-ventilation, slow the breath and make the breath lengthy and fine, and imagine that light is being drawn in with each breath. The words light and consciousness are interchangeable terms and at times there will be an instinctive desire to retain the breath, to allow time for the healing breath to become more affective. At no time is there to be any strain, or forceful retention, just a natural rise and fall of the breath with brief pauses to aid assimilation of prana.


There is a Buddhist belief that describes creation in terms of crystallised consciousness. This implies that life and the intelligence that organises life is a conscious living process, and that our own refined levels of consciousness can be the means to heal ourselves when out of phase with reality. The energy of the breath can be directed to any part of the body to help promote healing.
Posted by Unknown at Friday, December 11, 2015 No comments:

Let your eyes see only God

Touching, feel for inner truth
Each touch reaffirming
The perfect inner template
Of each living form 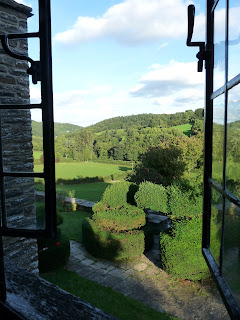